A pattern is rhythm. Like a mandala, a true pattern can spiral out into something wild and beautiful and still maintain cohesion, because repetition. Patterns, much like life, set a standard design and then deviate before returning to form. Patterned window treatments have existed all throughout history, first appearing as hand painted stretches of Chinese silk or French linen. Then growing in style and elegance to the swanky, evocative modern patterns hung today over some of the best views in the world. 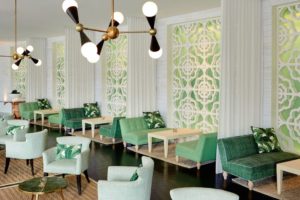 But it would not be until the latter half of the 20th century that patterns would begin intertwining their way into the aesthetic of
stylish American homes. A lot of this can be attributed to technological advancement in machinery: automated sewing machines to airplanes, coupled with a world trade market that was saw more international exchange of goods than ever (find more options from Diversified Bronze & Manufacturing Inc.). This created an environment where the patterns of the world could be exchanged on the global marketplace.

The 1970’s saw the first peak of this pattern fascination, everything from wallpaper to shirts, books, roller-skates and even dinner plates were all swathed in the pattern-mania.This extended love affair with patterns comes has no surprised from the tumultuous decade that gave the world disco, tie-dye and the psychedelic movement. Patterns grew far beyond their 70’s roots as the style became refined and elevated. Patterns would remain a recurrent theme in interior design throughout the decades. This enduring style has weathered many iterations, some much less pleasing to the eye than others! 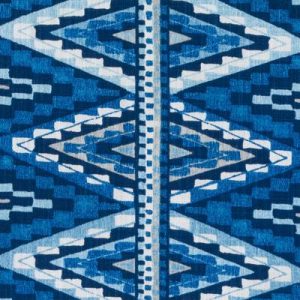 Now some forty years after patterns made their full commercial transition to America, they are once again at the pinnacle of style. Featured by leading tastemaker and interior design pioneer Schumacher as the September 2017 style dispatch highlight, patterns more specifically the Ikat pattern have definitely come back en vogue. Perhaps it is because in times of great political turmoil and upheaval, with find the rhythm of patterns reassuring and even soothing, used as drapery or upholstery. 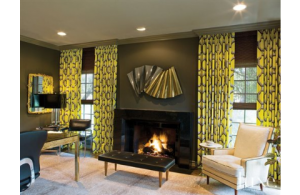 Hung over windows, big or small, patterns as a window treatment invite fantasy and narrative into the space where they reside. Often illustrated with repeating images or paints, patterned drapes exhibit the best of bold, imaginative style. For every personality there is a pattern that will match, be it blue chevron to express regality or yellow paisley for unbridled joy. Where there are patterns there is panache and a obvious sense of adventure and opulence that can make a powerful statement all on its own. Or be used a mixing tool with more minimal design aspects.