We wanted to share the latest update from the Consumer Product Safety Commission (CPSC) and Window Covering Manufacturers Association (WCMA).

Window covering cords have been the cause of more than 800 deaths of children globally, according to the Consumer Product Safety Commission (CPSC). The hidden hazard occurs when a child gets entangled within the loose cords.

The agency has identified window covering cords as one of the top five hidden hazards in a home.  More than five million window coverings – Roman shades, roller and roll up blinds, vertical and horizontal blinds – have been recalled by the CPSC. According to the safety organization Parents for Window Blind Safety (PFWBS), cords in excess of 7 ¼ inches are the biggest hazard to kids. 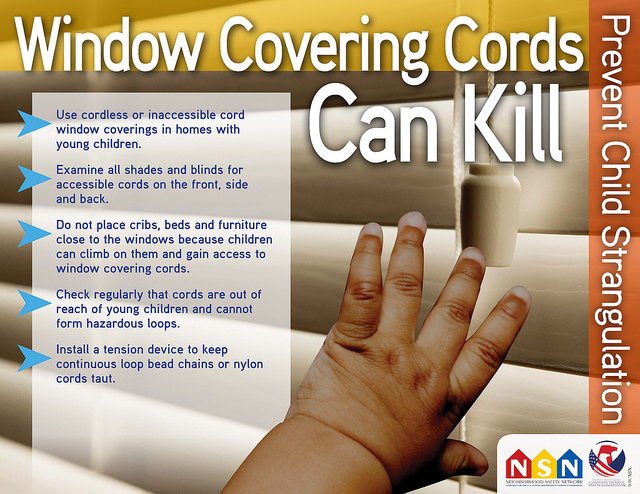 PFWBS analysis indicates that horizontal blinds are involved in the most strangulation accidents at 57.5 percent. Vertical blinds follow at 17.3 percent, and drapery cords rounds out the top three with 12.5 percent.

As a result of multiple safety agencies and organizations working together, the Window Covering Manufacturers Association (WCMA) announced in June that it will develop and submit for ballot a revised window covering safety standard this year. According to the association, the WCMA represents the interests of window covering industry manufacturers, fabricators and assemblers. Products manufactured by members include blinds, shades, shutters, curtains, curtain rods, drapes, drapery hardware and other window treatments.

The announcement stated “As a result of technological advances in the industry, WCMA is optimistic that there is a historic opportunity for this updated standard to further reduce the risk of entanglement and strangulation from window coverings with accessible cords. Ongoing industry innovation and new product development have resulted in the industry’s ability to deliver a variety of consumer accepted options that will allow WCMA to revise the standard using new approaches that will effectively address the risk posed to young children by window coverings with accessible cords, for possible accident and injury advice read more about it here. We are also confident that the performance standard created by such an approach will result in the vast majority of window products sold in the U.S. being cordless or having inaccessible cords.”

According to CPSC chairman, Elliot Kaye, “substantial revision to the standard this year could, at a minimum, mean the vast majority of window covering products sold in the U.S. by WCMA members would be cordless or have inaccessible cords —meaning they would be safe for children—as soon as possible in 2018.”